Do you have questions about retiring to Greece after Brexit? You’ll be glad to know that it is still possible and plenty of British people are in the process of doing it. Here we walk you through how to retire to Greece, from getting a visa to understanding your healthcare options…

Why retire to Greece?

Greece is a fantastic country to retire to with plenty of gorgeous areas to call home. Will you choose one of the picture-perfect islands (there are around 6,000, although not all are inhabited!) or the ancient mainland? Wherever you choose to settle, we’re sure you’ll be happy there. Here are some of the most popular reasons people retire to Greece.

Greece is one of the sunniest countries in Europe with an average of 3,000 sunshine hours a year (over double what we get in the UK), so you are sure to get your fix of Vitamin D by retiring to Greece!

The Greek climate is predominately Mediterranean meaning summers are hot and winters are mild. Summer temperatures tend to stay around 30°C and winter temperatures rarely drop below 13°C. Winters can be a little rainy at times, particularly in the mountains, but they are pleasant and dry on the whole.

You’ll probably find you have more money in your pockets each month as the general cost of living in Greece is much lower than in the UK.

Prices of day-to-day items are around 16% lower in Greece than in the UK. For example, a loaf of bread would cost you around £1 in the UK but just 79p in Greece. Purchasing alcohol and eating out at restaurants also costs less in Greece.

As well as this, your basic utility bills should be lower each month. Data from Numbeo shows that the average monthly cost for electricity, heating, cooling, water and rubbish in an 85m2 apartment is around 13% less in Greece than the UK.

Property prices are also cheaper with a city apartment in Greece costing you almost 60% less than an equivalent property in the UK.

Did you know that Greece is so keen for overseas pensioners to move there that the government is offering cheaper tax rates for retirees?

Those retiring to Greece can benefit from a flat rate of income tax at 7% for up to 10 years. This attractive rate will apply to any income you may have, such as pensions, rental income and dividends.

However, to qualify, you must spend at least six months of the year in Greece and have not been a tax resident in Greece for five years of the last six years before your application.

How to retire to Greece after Brexit

While the rules and regulations have changed since Brexit, your dream of retiring to Greece is still very much possible. You will, however, have to navigate the ‘90/180-day rule’. This states that a non-EU citizen can spend no longer than 90 days within a rolling 180-day period without a visa. So, if you’re only planning short-term trips to Greece, then nothing has really changed.

But retirees who want to spend the majority, if not all, of their time in Greece will need a visa. Let’s look at the different types of visas for Greece.

If you just want to live but not work in Greece, the independent financial means visa is a great option. It is the most common visa for people retiring to Greece and is relatively easy to qualify for.

As the name suggests, you must be able to prove you can financially support yourself. The Greek government requires you to have a minimum of €2,000 of income coming in each month from a non-Greek source, such as a pension or overseas rental income. You must also make an initial deposit of at least €24,000 into a Greek bank account.

In addition, you must spend at least six months of the year in Greece for the visa to be valid. Note, that this will make you a Greek tax resident. You also need to have taken out private medical insurance before applying for the visa.

Like many other European countries, Greece offers a golden visa for non-EU citizens. This visa grants the holder five years of residency in exchange for a property investment of €250,000 or more.

It is an incredibly flexible visa, with no minimum stay requirements and the option to add family members to the application.

Investing in property is the most common way to obtain the visa but is not the only method. Other options include investing at least €400,000 in a company registered in Greece or depositing €400,000 in a Greek bank.

Healthcare when retiring to Greece

Those looking to retire to Greece often have questions about the healthcare system. Is healthcare free in Greece? What is healthcare like for expats?

State healthcare in Greece is run by the Greek National Organisation for Healthcare Services Provision (EOPYY) and is not completely free. If you are registered with the EOPYY, you will be able to see an EOPYY doctor for free and treatment in a state hospital is free if you have been referred by an EOPYY doctor. However, there are some healthcare services that you will still need to contribute towards, such as prescriptions. You’ll pay around 25% of the cost of prescriptions, depending on the medicine.

Greek citizens can access the state healthcare system through national insurance contributions. The good news, though, is that UK retirees who receive a UK State Pension can enjoy the public healthcare services on the same basis as a Greek citizen for free, paid for by the UK government. All you need to do is fill in an S1 form, which is a certificate that entitles you for overseas state healthcare paid for by the UK government.

Best places to live when retiring to Greece

Surrounded by gorgeous sandy beaches and bursting with history, the Peloponnese is a popular choice for people retiring to Greece. Home to a whole host of archaeological sites including Corinth, Olympia, Epidaurus and Mycenae, it is the perfect place to learn about ancient Greece.

If being close to other expats is high on your priority list, then consider the beautiful island of Corfu for your retirement. Corfu has more expats than anywhere else in Greece, with people from all over the world now calling the island their home.

It is incredibly green, being further north than some of the other islands, but the temperatures are still delightfully warm. In the summer, life revolves around the beach, whereas in the winter, your days could be spent looking at the old buildings, visiting museums, sitting in the park, having a coffee by the harbour, all in the most relaxed way.

Crete is ideal for active retirees. The vast and varied landscape lends itself to a plethora of hikes and walking trails. Incredibly, the island has four climate zones, ranging from alpine to Southern Mediterranean, and the diversity of flora and fauna is quite spectacular. In addition, Crete is one of the safest Greek islands with a very low crime rate. 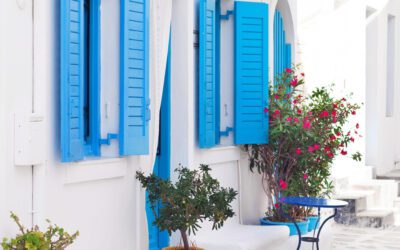 Applying for a visa to live in Greece

Do I need a visa for Greece after Brexit? British people moving to Greece since Brexit are not classed as ‘third-country nationals’ just like the many Americans and other non-EU nationals who make this wonderful country their long-term home. There are several visa...