There’s no denying that Europe boasts some of the most desirable holiday destinations on the planet, with almost twice as many metropolitan areas than the United States. But it’s not just a hotspot for tourist holidays!

The celebrity world is known for its lavish lifestyles and over-the-top luxuries, and when it comes to holidays, that is no exception. Several European countries are go-to destinations for A-list celebrities, from Emma Watson to Sir Cliff Richard, and many have purchased second and even third residences in countries like France, Spain and Italy.

So, we decided to take a look at some of the most expensive celebrity holiday homes in Europe…

The South-Eastern coast of France is by far the most popular European destination for celebrity holiday homes and it’s easy to see why. Renowned for its extraordinary lifestyle – from its mega yachts to its larger-than-life parties – the South of France is no stranger to a celebrity guest list. But it’s not just the red-carpet lifestyle that attracts celebrities.

Boasting over 300 days of sunshine each year, the South of France is a paradise full of culture and Michelin star food – not forgetting the exquisite Roman architecture. It is home to mountain-top villages, picturesque lakes, vineyards, and stunning beaches. Nice and St Tropez are particularly popular holiday hotspots, with the likes of Beyonce and Leonardo Di Caprio having been spotted there on several occasions.

Sir Elton John, famous for his hits such as ‘Candle in the Wind’ and ‘Tiny Dancer’, is a big fan of the South of France. When he’s not at his main residence in Windsor, the award-winning musician can be found soaking up the sun at his £15 million holiday home in Nice, with his husband David and their two children.

The 1920s French Riviera home of dreams has welcomed many guests including David Walliams, the Beckhams, Donatella Versace, Liz Hurley and even the Sussexes. Full of art and China collections, the ‘Rocket Man’ singer is known for paying tributes to other artists in his lavish home.

If you enjoy the good things in life, then St Tropez is an obvious destination for a holiday home. But why buy a single home when you could have an entire village? Johnny Depp has never been one for doing things by halves, and the Hollywood actor purchased an abandoned village just 17 miles from St Tropez at the height of his Pirates of the Caribbean fame, back in 2001. So, how much would your own personal village set you back in the South of France? 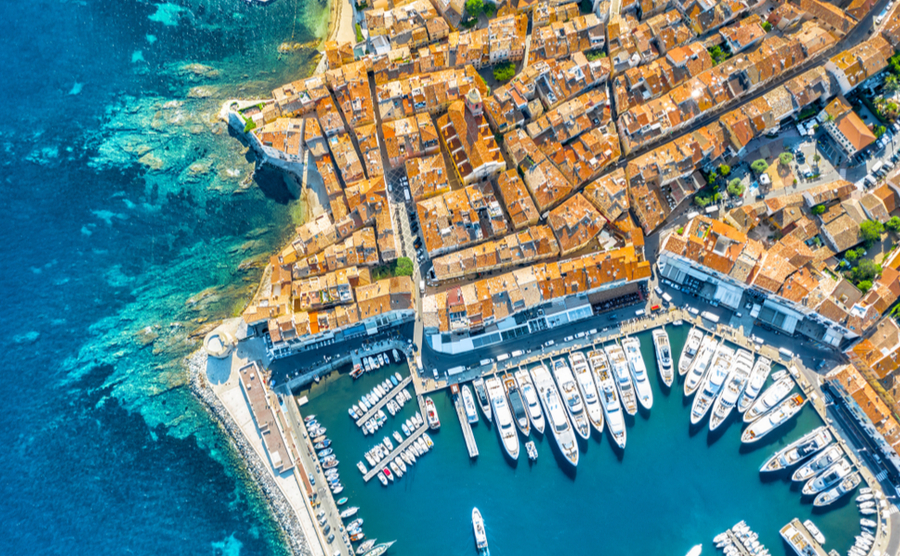 St Tropez homes, with parking for your boat….

Well, it’s now thought to be worth an eye-watering £52 million. Featuring its own private restaurant, the main house and six guest houses, Johnny Depp’s chic French village boasts a whopping 15 bedrooms and 14 bathrooms. But it doesn’t stop there! Within the grounds, you will also find two swimming pools, a gym, a skate park, a wine cave, and a charming town square, perfect for al fresco dining… talk about luxury!

George and Amal Clooney are no strangers to living a life of luxury and in 2021, the powerhouse couple famously purchased an 18th century estate as their holiday home in Domaine de Canadel, Brignoles. Boasting over 170 hectares, the beautiful country estate features a 25-acre vineyard, olive groves, tennis courts, a large garden, and a pool. The property is thought to be worth around £6.9 million.

Château Miraval in Correns, Southern France, was the holiday residence of the Golden Globe award-winning actor Brad Pitt and his ex-wife, Angelina Jolie. The 1,200-acre Correns home features 17th-century architecture and the remnants of a Roman chapel, as well as a private lake, olive groves, pine forests and it even has a moat. The £50 million property and all 35 of its rooms were supposedly the subject of the couple’s famous and lengthy divorce battle.

Let’s swap the idyllic South of France for the breath-taking French Alps! Méribel is the playground for the rich and famous – its glamorous ski resorts attract luxury-seekers from far and wide. The Hermione Granger actress, Emma Watson, purchased her luxury Méribel chalet in 2008 for just £1 million – bargain! The same snow-covered oasis is now thought to be worth £2.5 million.

Italy has always attracted A-listers thanks to its stunning coastline, glorious mountains, and scenic vineyards. Its crystal-clear waters, fishing villages and gourmet food are some more of the treats that Italy has to offer. Italy regularly welcomes celebrities from around the world including the likes of Declan Donnelly, Jessica Alba and Jay-Z.

The eighties heartthrob Sting owns one of the most stunning villas in the South of Florence – il Palagio Estate. Nestled away in the tranquil Tuscan countryside, the ancient Villa il Palagio offers an oasis of beauty surrounded by vineyards, a church, two country houses and a swimming pool. It’s a £5 million paradise away from his usual Wiltshire home!

The Manchester United player, Cristiano Ronaldo is no stranger to enjoying the finer things in life, from flash supercars to designer clothing. So, it comes as no surprise that his Turin villa is a modern escape fit for a footballer. The gated double-villa is situated in the foothills of Turin with panoramic views of the city and provides all the privacy a celebrity could need. For £5.4 million, the footballer’s mansion has its own private road, a private garden, 8 bedrooms, a gym, and an indoor pool.

Why have one European holiday home when you can have two? George Clooney famously lives a life of absolute luxury, and his Lake Como villa is situated amongst some of the most expensive celebrity homes in the world. Villa Oleandra is an 18th-century Italian villa with 25 rooms, a swimming pool, outdoor theatre, tennis courts and more importantly, a garage big enough to house Clooney’s collection of motorcycles. George Clooney purchased the Lake Como villa in 2002 for £9.8 million, so it’s likely to be worth significantly more today. 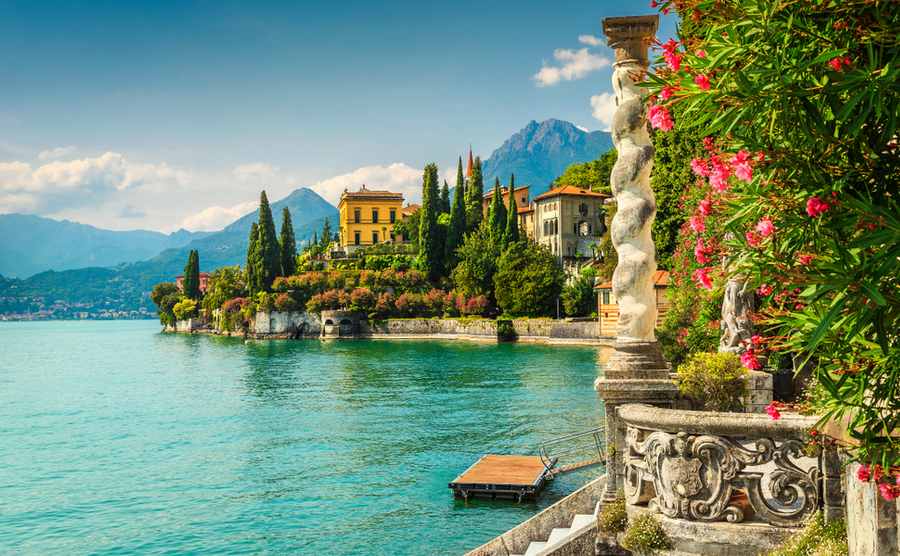 The Star Wars director purchased the 16th-century villa in 2009 and is thought to have spent millions on restoring the former Italian convent. George Lucas enjoys his Perugian retreat in private.

Spain has been one of the go-to celebrity holiday destinations for many years, and none more so than Marbella. Situated in the foothills of the Sierra Blanca, on the Costa Del Sol, the Mediterranean retreat has been a playground for the rich and famous since the seventies. Its diverse beaches, Michelin star restaurants and luxury shopping attract celebrities from all over the world.

Football superstar Cristiano Ronaldo’s second holiday home in Marbella boasts idyllic views of the Mediterranean. The 4-bedroom villa features floor-to-ceiling windows that offer uninterrupted views and flood the rooms with Spanish sunshine. It even has a veranda to provide much-needed shade during al fresco dining. Ronaldo’s lavish Marbella villa set him back a fairly reasonable £1.2 million.

Boxing legend Tyson Fury is well known for his eccentric lifestyle and his rags to riches story is quite possibly one of the most astonishing and admirable to be told. The Gypsy King’s palatial Marbella mansion features ancient architecture throughout, from elegant arches to the pediment roof. With its own mosaic courtyard and charging horse water fountain, the elaborate £6 million mansion is situated in one of the most famous celebrity hotspots.

If you’re looking for the ultimate Mediterranean retreat, then look no further than Michael Douglas’ Villa S’Estaca. Situated on the outskirts of Valldemossa, the dreamy 190-acre property is located high up in the Tramuntana mountains. The £26 million Majorcan estate features 5 apartments, 2 cottages and a loft, which is enough space for up to 20 people. And if that’s not enough, it also boasts a home cinema, a gym, a spa, a swimming pool, and a shower with sea views. 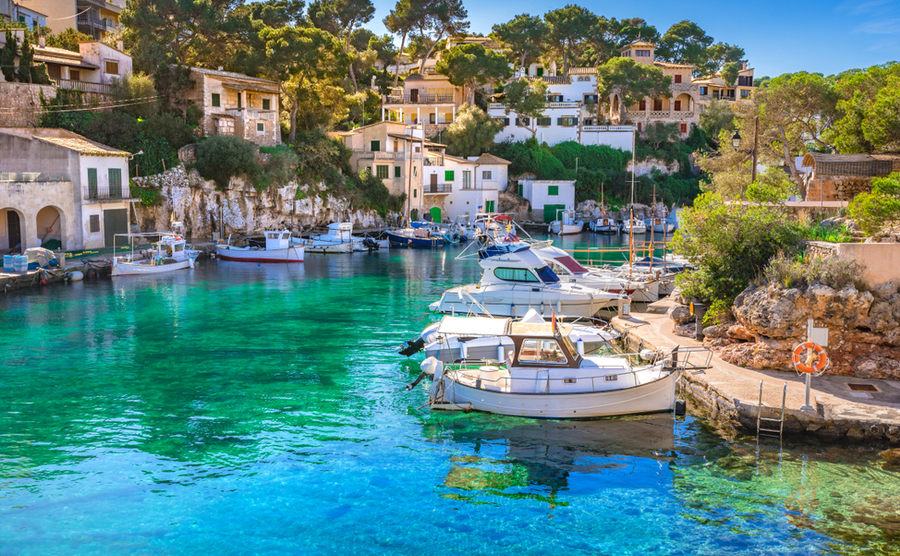 Which celebrity owns the most expensive holiday home in Europe?

Apparently, no one does lavish better than Tina Turner and her husband Erwin Bach. The ‘Simply the Best’ singer supposedly recently purchased a ten-building estate overlooking Lake Zurich in Switzerland!

Situated in the village of Staefa, the eye-watering 260,000-square-foot property comes with its own pond, stream, swimming pool and, more impressively, a boat deck. Turner’s property is worth an astonishing £67 million!

Have you been inspired by these impressive celebrity holiday homes? Find out how you could buy your own piece of paradise and get in touch with our suppliers today. Happy house hunting!

*Disclaimer* – All information, including facts and figures, depicted in this article, has been acquired using information that is publicly available on Google. Some of the celebrities mentioned in this article may no longer own the properties in question, however, they have been linked to them at some point.

The page you requested could not be found. Try refining your search, or use the navigation above to locate the post.